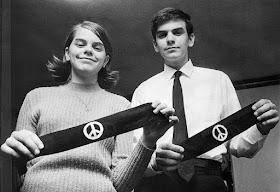 DETAILS: In February 1969, John Tinker made history when the U.S. Supreme Court ruled that First Amendment rights applied in school, thus reminding young people that they have a voice.

Tinker’s case started when, at age 15, he wore a black arm band to school protesting the Vietnam War. He was threatened with suspension and challenged the school district in his right to protest.

In the 50 years that followed the Tinker v. Des Moines Independent Community School District ruling, Tinker has remained a committed peace activist. He and his wife currently run a non-profit radio station in Fayette, Missouri with volunteers in their community.

As president of the John F. Tinker Foundation, he also helps educate students, teachers and school administrators regarding the First Amendment rights of students.

This event is cosponsored by the UIS Department of Legal Studies.

Individuals with disabilities who anticipate the need for accommodations should contact the UIS Speaker Series Office at 217/206-8507 or speakerseries@uis.edu in advance. For a list of other upcoming ECCE Speaker Series events, visit www.uis.edu/speakerseries/.
Blake Wood at 11:16 AM
Share