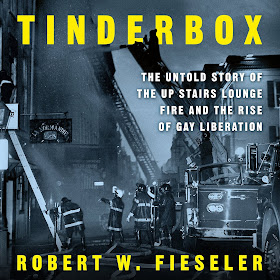 WHAT: The University of Illinois Springfield Engaged Citizenship Common Experience (ECCE) Speaker Series will kick off Queertober with author Robert W. Fieseler reading from his book “Tinderbox: The Untold Story of the Up Stairs Lounge Fire and the Rise of Gay Liberation.”

DETAILS: Forty-three years before the Pulse nightclub shooting became the largest mass murder of gays in the United States, an arsonist set fire to the Up Stairs Lounge in New Orleans, killing 32 people.

Journalist and nonfiction author Robert Fieseler, a Naperville, Illinois native, will share excerpts from his book, which recounts the tragic fire that happened on June 24, 1973. Fieseler uses survivor interviews and extensive research to weave a story with memorable characters living in a closeted, but thriving world before the fire.

Fieseler’s story of the forgotten history also reports the political and societal change that followed the fire with a supported and emerging gay rights movement.

Individuals with disabilities who anticipate the need for accommodations should contact the UIS Speaker Series Office at 217-206-8507 or speakerseries@uis.edu in advance. For a list of other upcoming ECCE Speaker Series events, visit www.uis.edu/speakerseries/.