UIS cancels or postpones events due to the COVID-19 outbreak 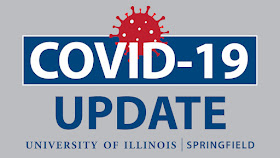 In an effort to promote public safety and social distancing, the University of Illinois Springfield has canceled or postponed several events due to the COVID-19 outbreak. The events listed below are the latest to be impacted. Rescheduled event dates will be announced in future press releases.

Grand opening for The Center for Lincoln Studies – April 29 – POSTPONED

In addition to these event changes, the UIS Performing Arts Center (Sangamon Auditorium) has also announced that it is ceasing all events through May 10. Please check uispac.com for specific updates.

The UIS Visual Arts Gallery will also be closed for the rest of the spring semester. The March 17 artist talk and “Convergence” exhibit are canceled.

UIS Athletics also announced on March 13 that The Great Lakes Valley Conference's (GLVC) Council of Presidents voted unanimously to suspend all activities related to intercollegiate athletics, and cancel the remaining 2020 GLVC Championships due to concerns of the COVID-19 pandemic. This action includes all UIS sporting activities.
Blake Wood at 10:11 AM
Share