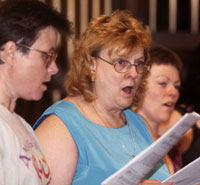 WHAT: The University of Illinois Springfield Engaged Citizenship Common Experience (ECCE) Speakers Series presents a screening of the documentary Amasong Chorus: Singing Out. The film will be followed by a discussion with guest speaker Kristina Boerger, who founded the choir.

DETAILS: Could a lesbian/feminist choral group succeed – and thrive – in an area best known for cornfields and conservatives? The award-winning ensemble, Amasong: Champaign-Urbana's Premier Lesbian/Feminist Chorus, proves that it can in this inspiring story of commitment, community and triumph. Jay Rosenstein’s acclaimed PBS documentary has toured festivals worldwide and enjoyed repeated local PBS broadcasts since its national broadcast debut in June of 2004.

Kristina Boerger founded the Amasong Chorus in 1990 and directed and produced two award-winning recordings for the chorus, which has performed at several national venues, and toured the Czech Republic. She holds the doctorate in Choral Conducting and Literature from the University of Illinois. Having directed independent choirs in Urbana-Champaign and New York, she was recently appointed Director of Choral Activities at Carroll University in Wisconsin.

Also mark your calendars for a live Amasong Chorus concert on Sunday, February 13, 4 p.m. at the First Presbyterian Church, 321 South Seventh St., in downtown Springfield (across from Lincoln Library).