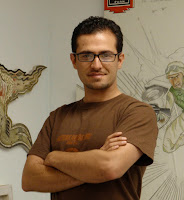 In honor of Hispanic Heritage Month, the University of Illinois Springfield (UIS) Visual Arts Gallery is pleased to present Strata, an exhibition from Chicano artist Eric J. García, who serves as the traveling art coordinator at the National Museum of Mexican Art in Chicago. The exhibition reception is held in conjunction with an Engaged Citizenship Common Experience (ECCE) Speaker Series event, “Mexican Muralists: Public Art for Social Transformation,” and is part of the Political Art and the Public Sphere (PAPS) Series.

García offers this context for his exhibit: “Layers of history, diverse cultures and conquests make up my complicated background. This exhibit illustrates some of the different ancestors that mixed, fought and ultimately created something culturally new. With the help of an assortment of media, hopefully these objects present not only the complexity of my identity but the circumstances that caused it.”

“Mexican Muralists: Public Art for Social Transformation” is an ECCE Speaker Series event that serves as a perfect companion to the exhibit. Garcia will address history and content found within his work and beyond. After the Mexican Revolution overthrew the Diaz dictatorship in the early 20th Century, the new government funded major public art projects. Murals by the best artists in Mexico were not created for the art world, but to communicate social and political messages for the public. They illustrated Mexican history and celebrated indigenous roots and non-European identity.

The Mexican Mural Movement became a model for public and political art that continues to inspire artists around the world, including Latinos --- such as Eric J. Garcia. As a forum in the Political Art and the Public Sphere Series, the main event will be an open discussion with the artist, in which we explore the social and political dimensions of Mexican art and his own work.

García is known for mixing history and culture with contemporary themes. He has shown his art in numerous national and international exhibitions. His awards include the prestigious Jacob Javits Fellowship and a Midwestern Voices and Visions Residency. Born and raised in Albuquerque’s South Valley, Garcia earned his Bachelors of Fine Arts from the University of New Mexico and his Masters of Fine Arts degree from the School of the Art Institute of Chicago.

The Visual Arts Gallery is centrally located on the UIS campus in the Health and Science Building, Room 201. Gallery hours are Monday through Thursday 11 a.m. to 6 p.m. For more information, visit the UIS Visual Arts Gallery website at www.uis.edu/visualarts/gallery or contact the gallery at 217/206-6506 or alach@uis.edu.

For a list of other upcoming ECCE Speaker Series events and more information, visit www.uis.edu/speakerseries/. All events are free and open to the public.
Blake Wood at 11:49 AM
Share