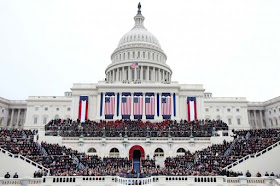 Democracy and Donuts II, will be held at the UIS Public Affairs Center Food Emporium from 4:30 to 6 p.m. This event is intended to provide an opportunity to reflect on the democratic process with a specific focus on the time period between the election and the inauguration. The event will feature four panelists, each with a different area of expertise in topics related to the impending inauguration.

An Inauguration Day panel discussion hosted by the University of Illinois Springfield and the Springfield Art Association will take place at Innovate Springfield, located at 15 Old State Capitol Plaza in downtown Springfield, starting at 5:30 p.m.

The unprecedented events of Election 2016 have shaken longstanding assumptions about American politics and left many people with questions. On Inauguration Day, a panel of scholars will be on hand at Innovate Springfield to answer them.

The public is invited to attend this free event. Street parking is available.
Blake Wood at 4:43 PM
Share