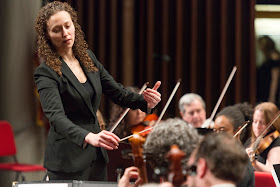 WHAT: The University of Illinois Springfield Music Program presents its Spring Showcase concert featuring performances by the UIS Orchestra, UIS Chorus and UIS Band. The performance is free and open to the public.

WHERE: Sangamon Auditorium, located in the Public Affairs Center

DETAILS: The event will feature a wide array of music including the first movement of Beethoven’s famous Symphony No. 5, a collaboration between the UIS Orchestra and Chorus by George Gershwin and a set of American-themed pieces for band. This concert will also feature UIS Music Soloist Competition winners Natalie Kerr and Samantha Hwang, performing their violins with orchestra, and Kimberly Nu-tall, singing with the chorus.

The UIS Orchestra, under the direction of Assistant Professor of Ethnomusicology Yona Stamatis, will lead the program with music from J.S. Bach, Leroy Anderson and Ludwig van Beethoven. The orchestra line-up is a preview for the highly anticipated “Music and Comedy” concert that the group will present on April 29 at 3 p.m. in Sangamon Auditorium.

Directed by Associate Professor of Ethnomusicology Sharon Graf, the UIS Chorus will combine with the Lincoln Land Community College Choir under the direction of See Tsai Chan. They will perform a set of pop and folk song selections including Ryan Tedder’s “Counting Stars” and Redding and Cropper’s “Sittin’ on the Dock of the Bay”.

The UIS Band will end the program with an American theme under the direction of Applied Music Specialist Abigail Walsh. The program will begin with David Holsinger’s “American Faces” and includes excerpts from Aaron Copland’s “Appalachian Spring”, “Downton Abbey - The Suite” by John Lunn and John Philip Sousa’s famous march “Stars and Stripes Forever”.