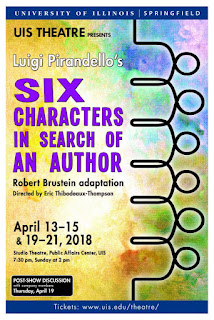 The Theatre Program at the University of Illinois Springfield will present Robert Brustein’s adaptation of the Luigi Pirandello play “Six Characters in Search of an Author” opening Friday, April 13.

Originally written in 1921, “Six Characters in Search of an Author” is an absurdist metatheatrical play. UIS Theatre will produce the 1998 Robert Brustein adaptation, which has been described by publisher Samuel French as a “highly acclaimed adaption of Pirandello’s masterpiece, a study in illusion and reality which follows a group of characters who try to fashion their life stories into acceptable drama.”

During the play, a group of theatre artists rehearse a known play and get interrupted by six characters from another play, which was never finished by its author. These six characters find themselves in a purgatory of sorts, trying to find a “home” for their stories to live in. Pirandello’s play reminds us that all great art takes on a life of its own, after being created, and we are challenged to find meaningful difference between a work-in-progress and its eventual effects on audience members.

The new UIS Theatre Box Office is open Tuesday through Friday from 11 a.m. to 3 p.m. in the Visual and Performing Arts Building (VPA 127). Patrons may call the UIS Theatre Box Office at 217/206-PLAY (7529) or visit www.uis.edu/theatre to purchase tickets online or learn more information.
Blake Wood at 11:40 AM
Share