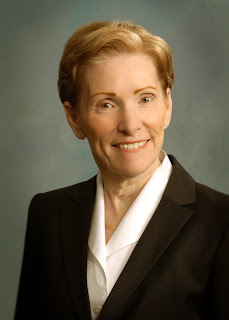 WHERE: Sangamon Auditorium lobby, located on the second floor of the Public Affairs Center (PAC) on the UIS Campus.

DETAILS: As vice president and chancellor of UIS, Koch will be responsible for the academic programs and operations of the Springfield campus. UIS serves approximately 5,000 students in 44 undergraduate and graduate programs in four colleges, with 211 full-time faculty, 533 staff and an annual operating budget of $73 million.

President Hogan called Koch a proven academic leader in announcing her appointment, effective July 1, subject to Board of Trustees approval.

Koch is currently Provost and Vice President for Academic Affairs at Northern Michigan University, where she has served since 2007. Before joining NMU, Koch was the Associate Provost and Dean of the Graduate College at the University of Northern Iowa.

Koch is a native of South Dakota, where she earned a bachelor’s degree in health/physical education/biology at Dakota State University. Her first job was as a high school teacher in Waterloo, Ia. She returned to college at the University of Northern Iowa and earned a master’s degree and doctorate, both in health education. Koch joined the faculty at UNI in 1985 and moved into administration in 1995.
Blake Wood at 2:29 PM
Share