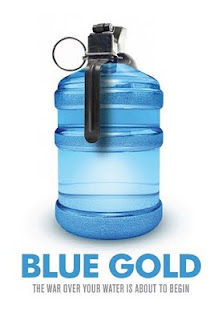 WHAT: The Political Art and the Public Sphere (PAPS) series at the University of Illinois Springfield presents a screening of the film "Blue Gold: World Water Wars". The film will be followed by a discussion moderated by Stefano Longo, assistant professor of Environmental Studies at UIS.

DETAILS: Based on the book by Maude Barlow and Tony Clarke and narrated by Malcolm McDowell, "Blue Gold: World Water Wars" sheds light on the world’s rapidly approaching water crisis and suggests that wars of the future will be fought over water, as the source of all life enters the global marketplace and political arena.

The world’s fresh water is disappearing. As our diminishing supply is polluted and wasted, corporations are moving fast to privatize fresh water. Also, military control of water is rising globally, setting the stage for world water wars. This international award-winning film follows various examples of people addressing the problem and fighting back.

Stefano Longo will guest moderate each session in the spring 2011 semester. Longo, who helped to curate the program for the spring 2011 series, earned his Ph.D. in Sociology at the University of Oregon in 2009. His expertise is in the areas of environmental sociology, political economy, and social theory. His research focuses on the global food system, examining the intersection of environmental and social processes in the context of food production, consumption, and distribution.

The PAPS series is a monthly event on the UIS campus featuring a showing or a performance of some kind of “political art,” followed by an hour or two of group discussion. Each of the installments in the spring 2011 series will provide a look at critical perspectives on ecology and environmental crisis.

For more information contact Dr. Richard Gilman-Opalsky, professor of Political Philosophy at rgilm3@uis.edu or 217/206-8328.
Blake Wood at 9:10 AM
Share