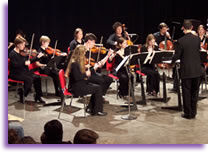 WHAT: The University of Illinois Springfield Music Program will hold its annual Spring Showcase Concert.

Highlights of the Chorus performance include Ariel Ramírez’ Misa Criolla and a combined performance of Fauré’s Pavane, Op. 50 with the Chamber Orchestra. Also programmed by the Chamber Orchestra are Holst’s Brook Green Suite, and a set of New Orleans dance orchestra music from the historic John Robichaux collection. In addition to music from the 1911 Sousa Band world tour, the Concert Band will perform Spring Festival by Chinese composer Chen Yi and Chester by American composer William Schuman.

Admission to the concert is free and open to the public. Donations benefitting the UIS Music Student Merit Award will be accepted at the door. Everyone is invited to meet the musicians at a reception in the Sangamon Auditorium Lobby will following the concert.