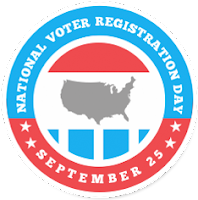 WHAT: Several student organizations at the University of Illinois Springfield are sponsoring a voter registration drive and educational events on campus to mark the first-ever National Voter Registration Day.

WHERE: PAC Food Emporium (due to rain)

In 2008, six million Americans didn't vote because they missed a registration deadline or didn’t know how to register. The purpose of National Voter Registration Day is to make sure no one is left out.

On September 25, volunteers and organizations from all over the country will "hit the streets" for National Voter Registration Day. This single day of coordinated ﬁeld, technology, and media efforts will create pervasive awareness of voter registration opportunities nationwide.

For more information, contact Mark Dochterman, director of the UIS Volunteer & Civic Engagement Center at 217/206-8448 or mdoch2@uis.edu. More information on the national event can be found at http://nationalvoterregistrationday.org/.
Blake Wood at 10:56 AM
Share