Political Art and the Public Sphere to screen RED RED RED, a film exploring the politics of AIDS 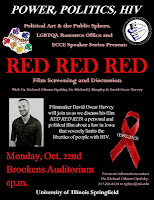 WHAT: The Political Art and the Public Sphere (PAPS) series at the University of Illinois Springfield presents a screening of the documentary RED RED RED. The film by David Oscar Harvey focuses on a law in Iowa that severely limits the liberties of people with HIV. Following the screening, Harvey will take questions from the audience during a group discussion.

DETAILS: RED RED RED is a personal and political film that considers big questions about the contemporary state of queer politics and the dimensions of identity for HIV-positive persons. The film has screened at numerous film festival internationally.

Harvey is a filmmaker and Ph.D. candidate at the University of Iowa in the Department of Cinema and Comparative Literature. He is also an educator, activist, artist and scholar regarding issues surrounding HIV/AIDS. His academic writing on HIV/AIDS has been published in a variety of journals.

The PAPS series is a monthly event on the UIS campus hosted by Dr. Richard Gilman-Opalsky, associate professor of Political Philosophy. This fall, Dr. Michael J. Murphy, assistant professor of Women and Gender Studies at UIS will co-host and moderate each PAPS event.

This semester, PAPS marks the 30th anniversary of the discovery and naming of the HIV virus (1982-2012). The fall series is dedicated to raising social, cultural, and political questions related to HIV, particularly how the disease has been treated as an affliction of a “despised sexuality,” as well as how different communities have been impacted by and have addressed the problem. All events are free and open to the public.