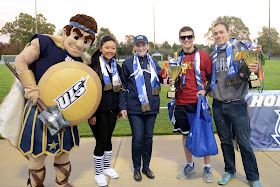 The University of Illinois Springfield invites students, faculty, staff, alumni and the local community to celebrate our 20th annual Homecoming Weekend on October 7 & 8. Highlights include the Homecoming Parade (Friday, Oct. 7 at 4:30 p.m.) followed by UIS Men’s and Women’s Soccer vs. Drury University. A free fireworks show will follow the game. To view a full list of Homecoming activities, visit www.uis.edu/homecoming/.

WHAT: The parade is an annual tradition of Homecoming at UIS. Come out and enjoy the festivities, the UIS band and much more!

WHERE: UIS Campus – The parade will start in parking lot C-north and end in parking lot F near The Recreation and Athletics Center (TRAC). The best place to view the parade is along Eliza Farnham Drive, near Founders Residence Hall.

DETAILS: Community members are encouraged to attend to watch the parade, enjoy, and learn more about the many student organizations, athletics teams and campus departments that participate in the parade.

WHAT: The NCAA Division II men’s and women’s soccer teams will play Drury University during the annual homecoming game.

WHERE: Kiwanis Stadium at UIS

DETAILS: Admission to the games is $6 for adults and children are $3. UIS students, faculty and staff are free with a valid iCard. Following the men’s soccer game, there will be a free fireworks display.

WHAT: The NCAA Division II women’s volleyball team will play St. Joseph’s College on Friday and the University of Indianapolis on Saturday in two homecoming appearances.

DETAILS: Admission to the games is $6 for adults and children are $3. UIS students, faculty and staff are free with a valid iCard.

WHAT: UIS Athletics will induct its third class into the Prairie Stars Athletic Hall of Fame during a formal ceremony on campus.