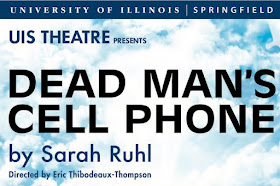 According to the Samuel French Play Service, “Dead Man’s Cell Phone” is “a work about how we memorialize the dead–and how that remembering changes us–it is the odyssey of a woman forced to confront her own assumptions about morality, redemption, and the need to connect in a technologically obsessed world.” The play begins with “an incessantly ringing cell phone in a quiet café, a stranger at the next table who has had enough, and a dead man–with a lot of loose ends.”

The play was written by MacArthur “Genius” Grant recipient and Pulitzer Prize finalist Sarah Ruhl. Among her most popular plays are “Eurydice,” “The Clean House,” and “In the Next Room.”