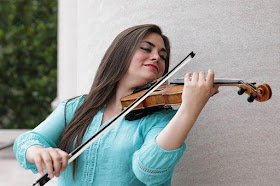 WHAT: The University of Illinois Springfield Engaged Citizenship Common Experience (ECCE) Speaker Series will kick off the semester by hosting a musical presentation and performance titled “A Tribute to Syria” featuring world-renowned and award-winning violist Mariela Shaker.

DETAILS: Mariela Shaker, who began playing the violin at age nine, will share her harrowing story of escape from Syria through inspiring words and music.

Full-ride scholarships to both Monmouth College and DePaul University in Illinois allowed her to escape the war in her home country. She is now a violin professor at Monmouth College helping students develop their full potential through their own personal voice and expression.

Shaker has performed with the Mesopotamian Symphony Orchestra and gave her debut recital at the Kennedy Center in celebration of World Refugee Day. She was named a Champion for Change for World Refugees by President Barack Obama and has played all over the world at the request of international leaders. She received the first-ever Anne Frank Promisekeeper Award in 2018 and is the peace ambassador for the World Council of Arameans.

This event is cosponsored by the World Affairs Council of Central Illinois.

Individuals with disabilities who anticipate the need for accommodations should contact the UIS Speaker Series Office at 217/206-8507 or speakerseries@uis.edu in advance. For a list of other upcoming ECCE Speaker Series events, visit www.uis.edu/speakerseries/.
Blake Wood at 11:10 AM
Share