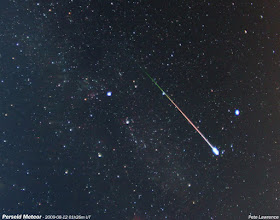 WHAT: The University of Illinois Springfield Astronomy-Physics Program, Lincoln Memorial Garden and the Sangamon Astronomical Society will host a special Star Party to view the annual Perseid meteor shower.

DETAILS: The Perseid meteor shower takes place annually in the beginning of August when the Earth passes through a stream of debris crossing the Earth’s orbit from the Swift-Tuttle. The 2019 shower is predicted to peak between August 11 and 13.

The Perseid meteor show is known for producing more fireball type meteors than any other meteor shower. In a dark location on any given night, between three and five meteors per hour can be spotted. During the peak of a shower, like the Perseids, there could be up to 60 meteors per hour.

The meteor viewing may be cancelled for cloudy weather. Questions about suitable weather viewing should be directed to 217/206-8342 after 6 p.m. on August 13. Updates will also be posted on the UIS Observatory Twitter feed (@UISObservatory).

Please note that this event in on Monday, August 12. Some of the Star Parties posters printed and distributed have the wrong date on them.

For more information on UIS Star Parties, contact John Martin, UIS associate professor of Astronomy-Physics, at 217/206-8342 or jmart5@uis.edu.
Blake Wood at 10:26 AM
Share