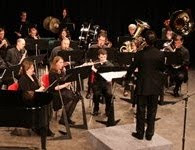 WHAT: For a musical tour near and far, UIS students, faculty, staff and community members are invited to attend the UIS Music Fall Showcase Concert.

DETAILS: The event will feature music from a variety of countries, cultures and historical periods. Highlights include Egyptian and Celtic inspired pieces, Swahili language, sounds of October, German atonal music, and a song from Queen.

Sangamon Auditorium doors open at 7:00 p.m. and the evening music begins at 7:30. The performance is free and open to the public. Refreshments will be served afterwards.

The Chorus, under the direction of Melinda Pitt Kaye, will open the Showcase with music of Christopher Tin: “Baba Yetu.”

Directed by Dr. Abigail Walsh, the Chamber Ensemble will perform selections including “Egyptian Legacy” by Soon Hee Newbold and “The Creation of Stonehenge” by Jeremy Woolstenhulme.

Finally, Dr. Walsh will lead the Band through selections including Eric Whitacre’s “October,” and Vasilij Agapkin’s "A Slavic Farewell."

Donations are welcome and will be used to benefit the UIS Music Student Merit Award. This year’s awards will be presented at the Fall Showcase.

The UIS Music program began in 2001 and is comprised of students, faculty, staff and alumni, as well as Springfield community members, all with a variety of skill levels. Anyone who is interested in joining the UIS Chorus, Band or Chamber Ensemble may contact Dr. Sharon Graf by emailing music@uis.edu or calling 217/206-6240.
Blake Wood at 9:44 AM
Share